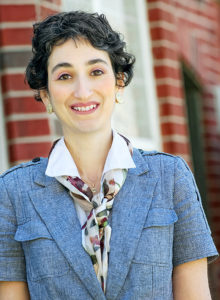 Biography: Rabbi Séverine Sokol serves as Rabbi, Director of Education, and Cantorial Soloist for Temple Sinai, a Union for Reform Judaism affiliated congregation, that is part of the National Registry of Historic Places, located near beautiful Lake Maury in Newport News.

Rabbi Sokol is the second French woman (and the first French woman fully of North African Sephardic origins) to be ordained in Reform Jewish history.  Her path to achieving her dream of becoming a rabbi is a story of dedication and perseverance.

She hails from Lyon, France, and has worked as a Jewish communal professional in the United Kingdom, United States, and France since 1998.

Rabbi Sokol earned her Rabbinic Ordination, Bachelor’s and Master’s degrees in Hebrew and Judaic Studies from the Leo Baeck College-Center for Jewish Education in London. She was trained and certified as a Diaspora Senior Educator at the Hebrew University-Melton Centre for Jewish Education in Jerusalem and was awarded a Bachelor of Arts degree in English Language and Civilization from the Université Lumière Lyon II.

Her work has appeared in numerous publications in the United States and England including the Daily Press, RJ.com, and European Judaism.